About the event itself 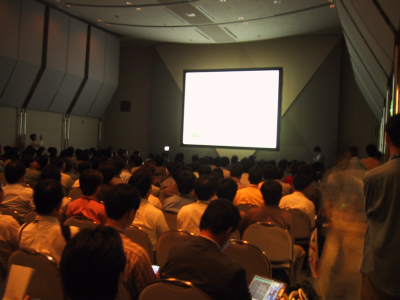 The event was subtitled "BSD, Life with Revolution Evolution DEVOlution" (the title was taken from a song title by a Japanese cult rock band). We have done this kind of event a couple of times.

NetWorld+Interop provided us with the meeting room as a courtesy. We would like to thank them here.

To summarize the event in 4 words, it was A LOT OF FUN.

This company, ROOT Inc., manufactures an embedded NetBSD device, with 802.11 and ethernet device built in. The specification of the device is as follows:

The answer to "why NetBSD?" was "pure luck". Someone recommended NetBSD by chance (if the recommendation was different, he could have picked Linux or other *BSD). Luckily for us NetBSDers, he is happy with his choice.

He also announced a scholarship possibility, for those presenting their ideas for the usage of root-hq.com wireless devices.

Shigeru Yamamoto of IIJ, on SEIL-T1

SEIL-T1 is a small router device for small offices and such. IIJ is actually an ISP, and it's rare for an ISP to manufacture routers. IIJ has router-integrated services, like router maintenance outsourcing and such. Also, it should be noted that IIJ is highly active in the IPv6 arena. This is the first ISP to launch official IPv6 connectivity service in Japan.

Good things about using NetBSD: the availability of source code, multi architecture (and the cleanness required to be such), UNIX programming environment for user interface portion.

An attendee suggested to use Hitachi-made commercial compiler, which should be more stable than gcc.

With a hidden command he demonstrated that it runs BSD/OS 3.1 :)

With his mods, binaries compiled with gcc -stack-protection become safer against buffer overrun attacks. The technique includes reordering of auto variables, checks against signature variable after function call, and some other items. The modification is made against gcc intermediate code, so it should be easier to be architecture independent.

His notebook PC runs FreeBSD compiled with the modified gcc. It requires modification to gcc (of course), 6-line changes to the kernel, and 16-line changes to shared library. The compilation was very simple - just a matter of "make world".

He has tested his mod on i386, sparc and powerpc. He solicited for more testers. Also, he suggested to compile FreeBSD packages (precompiled third-party application binary) with safer compiler like this, to protect many users.

He presented the internals of Mac OS X, and demonstrated its GUI. To quote Steve Jobs, "Mac OS X will be the most popular UNIX distribution". From the market statistics it seems true. Also, Mac OS X/Darwin seems to include the KAME IPv6 stack (which is one of the contributions from Japan to the BSD community), but its not enabled yet.

Apple is taking a very aggressive approach in switching their operating system from a legacy non-protected one to a modern one (compare it with Microsoft, which is having very hard time switching from Win95/98 to Win2K/XP). This may be because this is very critical for Apple to transition (if they fail to switch, the company may vanish).

She clarified the goals/plans of WindRiver on BSD, after the BSDi merger.

XCAST is short for "explicit multicast", an experimental multicast-ish protocol discussed in IETF. It is designed for multicast groups with small number of people/group (like a mahjong net game with 4 participants each). With normal internet multicast, the multicast routing table management on routers would be cumbersome, There are patches against NetBSD 1.5, FreeBSD (2.2.8+KAME, 3.5+KAME and 4.3), and he called for more geeks to play with it.

He presented this over IPv6 video chat application (of course with XCAST), from UC Irvine!

He solicited for more illustrators (to draw cute "skins") and voice actressess.

ASCII is a major computer publisher in Japan, and is known to be an advocator of BSDs and UNIXes. He announced that the company can let people use ASCII meeting rooms for free software activities (like this BoF). ASCII is located in Shibuya-ku, near Shinjuku and Hatsudai station (central Tokyo). Detailed descriptions were given, like no commercial activity (selling T-shirts for non profit purpose would be okay), the equipment in the meeting rooms, network availability, that one ASCII employee must attend, how guards would audit attendees, and such. Contact kahei-s@ascii.co.jp.

Back to  NetBSD events page